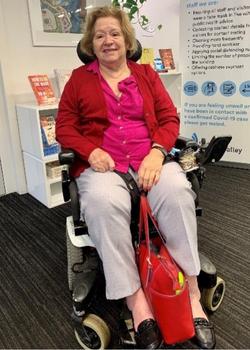 For Angela Galeano, her public library is about so much more than books.

Angela is originally from Argentina. She has been attending English classes at Flemington Library in Melbourne’s inner north-west since 2018.

Sitting in class and chatting with her fellow classmates is when she feels most content.

But, for Angela, getting to class can be tricky.

Several years ago, she had a severe stroke that affected her hearing and mobility. Since then, she uses a wheelchair to get around. That includes to the many classes she’s signed up to and completed at Flemington Library.

“The hoist lift was too small for my wheelchair, making it difficult for me to use,” she explained.

The Flemington Library Refurbishment, due to being later this year, will make a real difference to Angela's experience. It’s more than just a face lift. It’s a critical transformation project that will make each area of the library accessible to people of all abilities.

Once the refurbishment is complete in early 2023, Flemington Library will have a new lift, more public bathrooms and redesigned meeting rooms. With sustainability in mind, it will also have an insulated roof with an air handling system to reduce carbon emissions.

The library received $1 million through the State Government’s 2021-22 Living Libraries Infrastructure Program, which was matched dollar for dollar by Moonee Valley City Council. It is one of 109 Living Libraries projects the government has invested in since 2015, which include new libraries, upgrades to existing facilities and library vans.

“The upgrades will allow me to access the library more easily,” Angela said. “And I will want to visit more often.”

Angela said that while she will enjoy the library’s impressive facilities, it’s the connections and friendships formed there that are most important to her.

“It is very important for me to attend the English classes for my social activities, making new friendships and it helps with my memory loss after my stroke,” she said.

“For me it’s not just a library with books, but a place for me to learn and socialise.”