Home
About usNews Spotlighting the ties that bind at Northern Reserve

Spotlighting the ties that bind at Northern Reserve

They say the bonds of friendship and community forged within sports teams can last a lifetime.

Newborough Football Netball Club in Victoria’s Latrobe Valley is living proof of this. With a history that stretches back to the 1950s for football and the 1970s for netball, the community built around the club has stood the test of time.

Stephen Hall, who was club president for 10 years right up to 2018 and is now a life member who assists with grants, takes pride in the fact that membership often gets passed down through the generations.

“You find that a lot of the players we have, in both football and netball, come from within families,” Stephen said.

“A lot of the time it’s brothers and sisters playing at the club. It’s not just the current generation either. My father was one of the original footy players, and the current president, Colin Bird, is the son of a former president,” he added.

The club is moving from strength to strength. In June 2021, the lighting for their netball court at Northern Reserve was upgraded as part of the Latrobe City Council Sports Lighting Projects. It now has 200 lux LED lighting, which is more efficient than traditional lighting and allows players to see brighter and sharper images during night games.

The projects, which also installed lighting upgrades at George Bates Reserve in Yallourn North, Old Trafford Oval in Traralgon and Ronald Reserve in Morwell, were supported by over $1 million from the Victorian Government’s Community Sports Infrastructure Stimulus Program and delivered in partnership with Latrobe City Council. 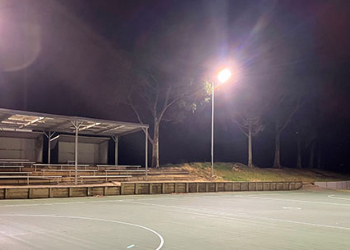 Aside from facilitating evening training for the netball teams, the lighting upgrade has also helped the club run weekly dinners to foster connections between its athletes and celebrate club milestones.

“The lighting upgrade has helped us get more people in on a Thursday, including people who aren’t players, which of course helps us with fundraising and supporting the teams. On a good night we’ll do up to about 80 or 90 meals,” Stephen explained.

With upgraded facilities and athletes keen to throw themselves into competitions, Stephen is feeling optimistic about the future.

Aside from wishing his athletes every success in their competitions, he also hopes that their involvement with Newborough Football Netball Club enriches their lives beyond the games.

“Wouldn’t it be great for our athletes to be out in the community 10 years from now, spot someone they played sport with, and stop to exchange a few words before going on their way?,” he said.

“That’s what sport is about, it’s about making people’s lives better.”